At a time in France when the draft law on protecting the cock’s crow, the cicada’s song and for instance the smell of manure, has just been adopted at first reading by the National Assembly under the title “sensory heritage of the countryside”, what do the following different sounds have in common?

All have recently been registered as European Union Trademarks!

The reform known as the “Trademarks Package” has indeed substantially modified European and French legislation in this field, in particular by eliminating the requirement for graphical representation of a trademark, thereby enabling the protection of trademarks that are sounds, animations or which consist for example of multimedia.

The sign must henceforth simply “be capable of representation on the national register of trademarks in such a way as to enable any person to precisely and clearly determine the subject of the protection conferred upon its owner” (French IP Code, Art. L. 711-1, para. 2), a condition that can be met by filing an MP3 file.

These measures entered into force in France on December 11, 2019, and it is logical therefore that the French IP Office published the first trademark sound application on 17 January (not yet registered): 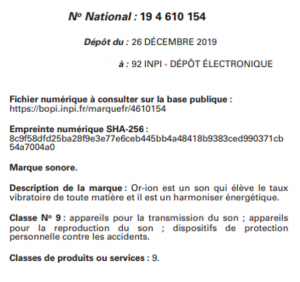 While the protection of this type of sound trademark has clearly become easier, thus opening new perspectives for applicants, numerous issues arise in practice.

How is the distinctiveness of such a trademark to be assessed? What are the criteria to take into account? How is the primary function of the trademark, i.e. identifying the origin of the goods and/or services, to be evaluated? By way of example, the EUIPO has already refused to register an alarm sound/telephone ring on the grounds that it was a sign (consisting of a repetition of notes), considered as conventional and common, not memorized by the customer, and thereby not making it possible to identify the commercial origin of the goods and services concerned by the filing.

Which criteria will be applied to compare two sound signs in the context of an opposition or in infringement proceedings? Will a technical analysis of the sound be made? Because an “original” sound is protected by copyright, it is likely that this type of question will frequently be referred to the courts, it not being possible for copyright to be used as a basis for an opposition or (future) action for revocation before the French IP Office.

Although joint reflection by the national offices via the EUIPO harmonization program has been undertaken to shed light on certain aspects, (https://euipo.europa.eu/tunnel-web/secure/webdav/guest/document_library/contentPdfs/about_euipo/who_we_are/common_communication/common_communication_8/common_communication8_en.pdf), there can be no doubt that case law will be called upon to clarify these multiple issues in the near future.

We will naturally be following these matters closely, as well as the status of this first French filing!

In the meantime, we are at your disposal to assist you in any new project.

Perrine Waendendries  is a French Trademark and Design Attorney with more than 15 years of experience in intellectual property firms. She joined Santarelli in 2016 and holds a master in Laws in IP from Lille 2. Perrine manages global IP rights portfolios of clients in various fields of activity, and is also in charge of the organisation, on behalf of the CNCPI, of training sessions for the preparation of the EQF/ French Qualifying Examination.