The family name, a trademark like no other, linking to individuals with renowned qualities: a trademark animated in the primary sense of the term: personal name trademarks and more specifically signs consisting of the founder’s family name (sometimes associated with a forename) are traditionally more present in certain sectors of activity such as the automobile, wine, luxury and fashion sectors. It suffices to cite a few examples of French flagship trademarks to illustrate the place the personal name occupies as a commercial choice, such as ‘RENAULT’ and ‘CITROEN’ in the motor vehicle industry, or ‘Inès de la Fressange’, ‘Jean Paul Gaultier’,and ‘Yves Saint Laurent’, who are also renowned French creators and stylists.

Family stories are often difficult to handle. Admittedly, the family name constitutes an inalienable and imprescriptible right of personhood, but the Code of Intellectual Property (CIP) allows registration of a family name as a trademark, subject to meeting the conditions provided in Article L711-1 et seq. of the CIP. Any individual or legal person can thus file and use a family name as a trademark as long as they do not impinge on the rights of third parties. This registration prevents a any competitor having an identical family name from using it and/or from registering it, at least in the same or related sector as the specialty covered by the first filing, except in the case of homonyms, in which use of the same family name is allowed in accordance with fair business practices, as provided in article L. 713-6 of the CIP. [1]

The critical situation: when the link is broken with the legitimate bearer of the family name: what is the situation when the trademark has been assigned to another by the person bearing the family name and that person is ousted from the company of the same name that employed him or her? The homonym exception should not apply here, as how would it be possible to prove good faith?

Wine-producing estates, which are often based on family property, are no exception to this. Virginie Taittinger, one of the descendants of the TAITTINGER family, of the same name as the famous Champagne trademark, was for example at the center of a family dispute which lasted four years (which, though long, is modest compared with certain disputes over Champagne names such as HEIDSIECK which have lasted more than a century and which illustrate not only the sensitivity of this kind of issue but also the economic and legal stakes).

A few points of note: the Taittinger trademark asserted by “SAS TAITTINGER COMPAGNIE COMMERCIALE ET VITICOLE CHAMPENOISE” (hereinafter Taittinger CCVC), is the word trademark “TAITTINGER” registered in 1968 in classes 32 and 33, for Champagne wines among others. In 2005, Virginie Taittinger assigned, through an agent, her shares in the company who owned the trademark. The assignment included a clause whereby the family undertook irrevocably not to use the Taittinger name (as a trademark, trade name, domain name or other sign) to designate competing goods and services, throughout the world.

Further to being dismissed in 2006, Mrs. Virginie Taittinger, who had worked for twenty years in the Taittinger family business, decided in 2008 to create a company “BM & VT” specialized in the production and distribution of champagne. She then filed a trademark “Virginie T” in classes 32 and 33 (covering champagne among other things), which she is using with the logo

Taittinger CCVC, owner of the Taittinger trademark, then summoned her before the Court of First Instance of Paris[2]. As its main plea, the company sued for breach of the assignment agreement that limited the use of the Taittinger name by the assignors and, on a subsidiary basis, on the basis of harm to the reputation of its Taittinger trademark and parasitism. The Court of Appeal of Paris[3] found against Mrs. Taittinger for breach of a contractual clause and dismissed her other petitions. The Supreme Court (Cassation) overturned that decision[4]. The referring Court of Appeal[5] brought an end to this litigation.

It is to be noted from this decision that:

1. Virginie Taittinger’s contractual liability was not incurred since the agent who executed the trademark assignment under mandate, made an undertaking exceeding the scope of the mandate conferred upon him. The Supreme Court and the referring Court of Appeal confirmed this point: “the sales mandate, which, in broad terms, authorized the agent to give any undertaking or warranty, did not include the power for the agent to agree to a prohibition or limitation by the mandator of the use of her family name, constituting acts of disposal.” It was thus incumbent upon the purchaser to check the scope of the powers conferred upon the agent to validate the assignment as well as the warranty clauses associated with that assignment.

2. As regards the reputation infringement of the TAITTINGER trademark, the referring Court of Appeal drew a distinction between references made to the person Virginie Taittinger from references made directly to the renowned trademark Taittinger. Lastly, there are two phases to carry out: one being to assess the profit unduly derived from the reputation of the Virginie Taittinger trademark, the other, once infringement has been determined, being to examine whether there are any valid grounds.

fully comply with the conditions set out by the referring Court of Appeal.

• As for the explicit references to the Taittinger Champagne House in connection with her family origins, 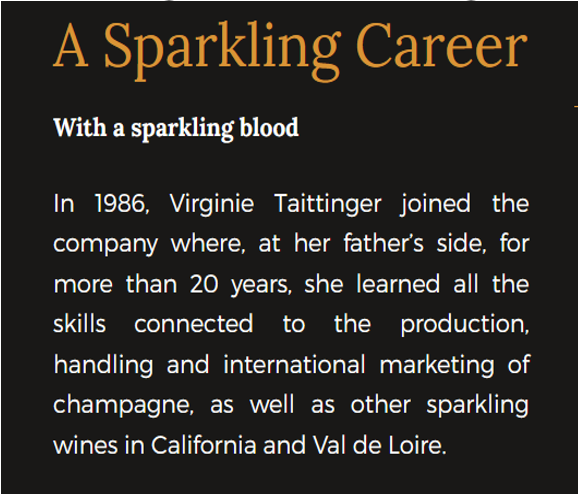 (references from the internet site www.champagnevirginiet.com, the referring Court of Appeal held that although thy take advantage of the reputation of the Taittinger trademark, these are “legitimate” references, giving exemption from liability, due to Virginie Taittinger’s family origins and the many years she spent in the company. For the judges, “these circumstances, which are exclusive of any bad faith and any behavior contrary to honest use in industry or business […] all constitute legitimate grounds leading to dismissal of the complaint of infringement of the well-known trademark”.

3. As to the pleas relating to parasitism: these were rejected since the references made to the Taittinger trade name and company name were legitimate and not improper ‘notwithstanding the acquired reputation and prestige”, and moreover stressed that Mrs. Taittinger had shown evidence of her personal investment.

CONCLUSION: this decision was favorable for Virginie Taittinger, but is probably a very singular case, due to her long career within the well-known family business and that the use made of her family name was purely factual, descriptive and directly connected to her position within the Taittinger House at the time it was a family business. It is unlikely that the facts of this case will be applicable to most disputes linked to assignments of family names.

In practice, it is to be noted that the holder of a family name will encounter great difficulty in recovering and using his or her name without the agreement of the company to which it was assigned, especially in case of dismissal from the structure that employed him or her.

By assigning a family name trademark, its assignor undertakes to ensure peaceful exercise of the rights assigned to the assignee.

The assignor also agrees not to use the family name in business or to file an application for trademark registration (incidentally, on this point, Virginie Taittinger was careful not to apply for the trademark “VIRGINIE TAITTINGER”, but “Virginie T”, since the Court of Appeal’s decision would otherwise have been quite different).

If the assignor of a family name wishes to secure such a right, it is therefore essential for him or her to obtain express and unambiguous contractual terms before the assignment, specifically indicating the business use of said name he or she wishes to make in the future.

The family name trademark is not among the simplest. It also comes up against the extrapatrimonial rights attached to the family name as well as the freedom to carry out a professional activity.

To avoid the particular uncertainties linked to family names, an alternative could be to turn to trademarks consisting of invented names, such as the famous sausage “Justin Bridou”, which is entirely a neologism derived from “Just one” (referring to a single sausage) and BRIDOU (referring to traditional sausages which are “bound”, or “bridée” in French). This has the merit of not preventing use of any family name, when the trademark is assigned, and avoiding the risk of associating the family name with the image of a trademark (in particular in case of scandal), but all things are a matter of taste and family history; a delicate balance has to be achieved between one’s family name and one’s trademark. Whatever choice is made for a patronymic trademark (real or invented), it is essential to check if the family name is available for any commercial operations (an invented family name could infringe a third party’s trademark or true family name), with the assistance of a trademark attorney, by carrying out clearance searches prior to any use or trademark application in order to determine any legal obstacles on the contemplated name.

Séverine FOULATIER-BRUCO is a French IP Attorney and European trademark and Industrial Design Attorney, having dual expertise: after 14 years as an in-house lawyer in companies dedicated to the defense of well-known trademarks, she has practiced in IP firms for the last 10 years.  She joined the firm Santarelli in 2012. She advises and assists clients of varied profiles, including large French companies, in the management of their portfolios and in the defense of their IP rights both in France and abroad.

[1] L. 713-6 I 1 of the Code of Intellectual Property (CIP) provides that: “A trademark does not allow its owner to prevent a third party from using, in business in accordance with fair business practice: 1) His family name or his address when that third party is a natural person”;